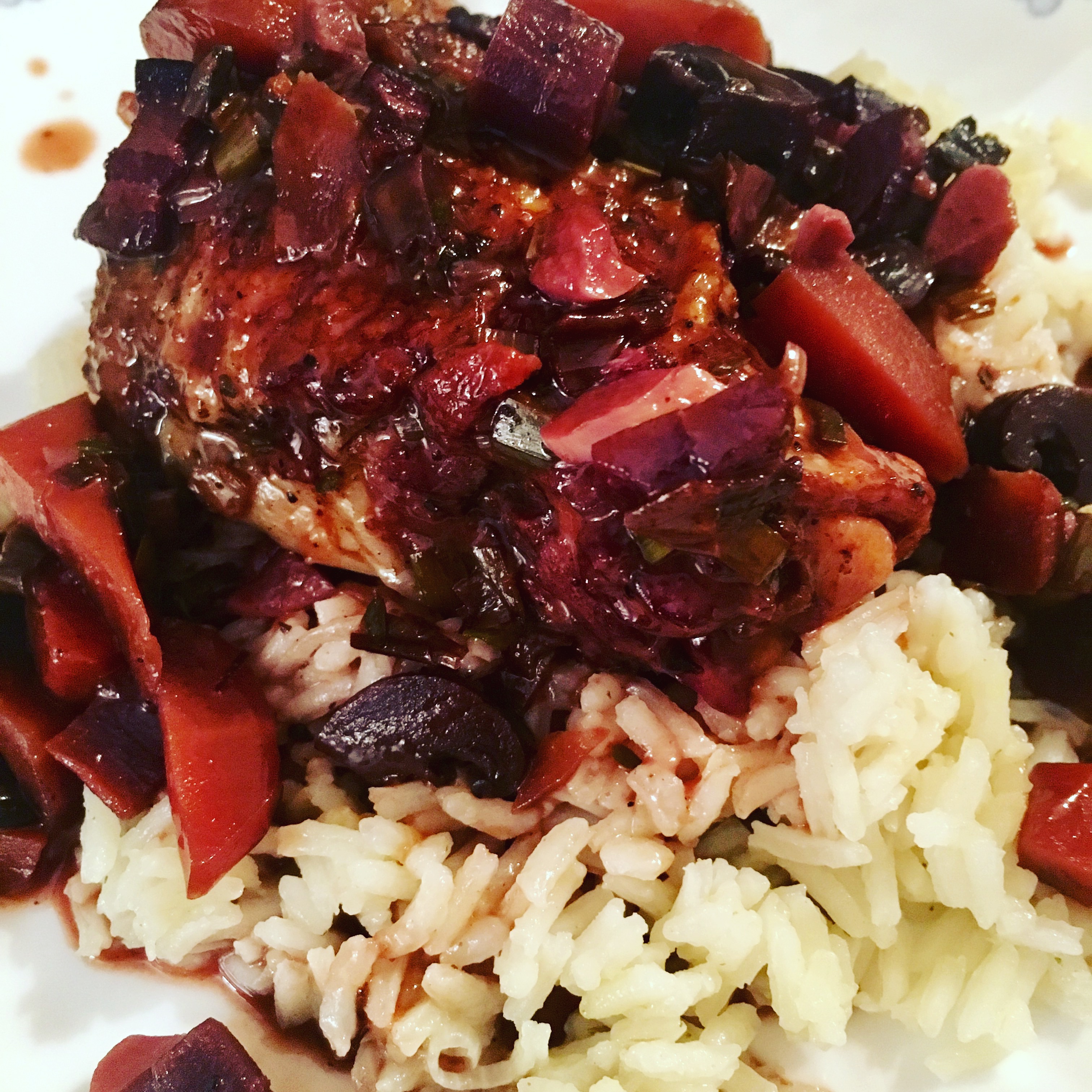 When most people think about French cooking, they probably think of highly complex dishes with a lot of steps. And that can be true for many, many recipes. However, just because a recipe may seem complicated and has a lot of ingredients, doesn’t mean it’s hard. In fact, I’ve found that it’s relatively easy to make a passable coq au vin, and once you get the steps down, you’ll probably be whipping this up regularly for a nice Sunday evening meal or for dinner parties.

The other good news is that this recipe is extremely versatile. You can really do this with almost any cut of meat, though it tends to work better with tougher cuts that need to braise for a decent amount of time. But seriously, you can do this same recipe with a pork roast, pork cheeks (my personal favorite), or brisket or other stewing meat. You can even do this with turkey thighs, though I’ve never tried it and I imagine the cooking time would be somewhat long. You could even probably do this with lamb or venison or other game meat (in fact, I want to try this with some lamb, as it’s one of my favorites). You can even go leaner and do this with boneless chicken breasts, though the time will need to actually be reduced or else the meat can get very dried out.

For this version, I used chicken legs and thighs, which I love. I love the fatty, richness of the meat, especially when it simmers long enough to simply fall off the bone.

And it really, truly is a simple recipe when you break it down into its basic stages:

Doesn’t that sound simple? I promise, it is. It does take a while to braise in the oven, though, so make sure you give yourself enough time.

A couple of notes on the ingredients I used:

First, I used colored carrots, maybe foolishly. We get these gorgeous carrots at the market that look cool, but really taste just like any other carrot. The purple ones have a nice, deep hue that go well with the dish. The wine and tomato paste, however, swallowed up most of the color of the brighter colored carrots. It would’ve been perfectly acceptable to just use regular carrots.

Second, I opted (as usual) for vegetable bouillon. I tend to prefer that to chicken stock or other animal-based bouillons because it’s less salty and just as flavorful. This dish gets plenty of depth from the bacon and the chicken itself, so adding chicken stock will really only make it incrementally better. That said, if your heart is set on using chicken stock, don’t let my personal preferences stop you.

Lastly, a note about cooking wine: Don’t spend too much on the bottle, but definitely get something you’re going to enjoy drinking. If you spend a lot of money on a nice bottle, you’ve likely just raised the cost of what should be a relatively inexpensive dish to make. On the flip side, if you don’t like the wine to drink, then you probably won’t like it in your dish. This particular wine was recommended by a friend and it was on the sweeter side (even for a merlot). I typically prefer cabernet sauvignons or big-bodied bordeaux wines (which are blends of cabernets and merlots).

The recipe and more pics are below. If you give this a shot, let me know what you think. And if you do, post a pic on Twitter, Facebook or Instagram and tag it with #eatfrenchclub.