The Simple Pleasures of Tartines 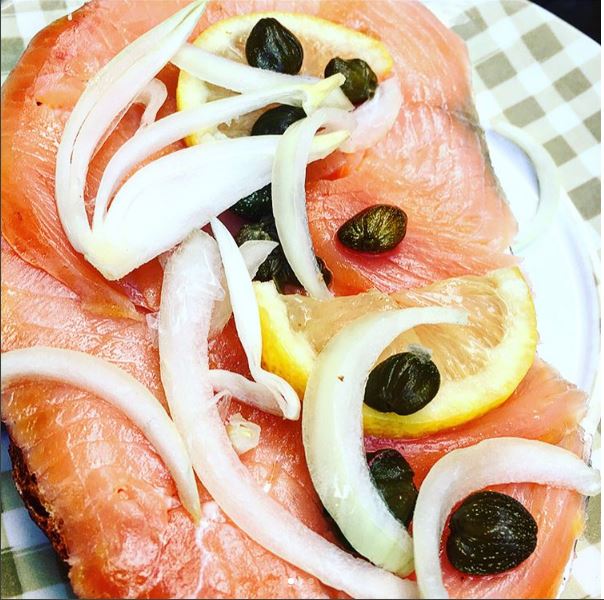 Too often, when people think of French food, they think of intricately prepared dishes with a lot of ingredients that can take hours to prepare and require a culinary degree just to read the recipe. I’m happy to tell you that not all French food is like this, and in fact, the simpler the better is often true.

Take the common tartine, for example. A tartine is an open-faced sandwich that can be served hot or cold, sweet or savory. It’s often associated with the goûter, the 4 pm snacktime that’s part of the French diet (and other European ones as well). As such, they often have something sweet on them: nutella and nuts, for example.

Last Sunday afternoon, we had checked out the Nantes Carnival and after a couple of hours of jostling with the crowds we were feeling peckish. As we made our way through town, we passed by L’Epicerie, a small cafe that specializes in tartines that I’ve been wanting to try. I’ve passed by it many times around lunchtime and it’s always packed, so I was happy to have a chance to try it out.

Inside, the decor is all wood that gives it an old-timey, vintage feel. In other words, it’s homey, which is great because the food is designed to remind you of what your French mother (if you had one) may have made for you at snacktime. Despite being a small chain (they have three other locations in three other cities, so it’s not like they’re a McDonalds or anything), everything we ordered was freshly made.

We were hungry so we started out with three tartines:

Each came out on a long, thick slice of freshly baked bread that was nice and crusty along the edges but also soft and airy in the middle. The salmon and anchovy topped tartines were served cold with onions, capers and thin lemon slices. The pesto tomato came with a thick layer of melted mozzarella and oven-roasted tomatoes.

The two fish tartines were bright, fresh and refreshing. The marinated anchovies are far from the usual brown things you see on pizzas that are way too salty. These were light little oily fish bites that complemented the tang of the caper and lemon. The smoked salmon was nice and salty, and extremely fresh. And neither of them were overpowered by the raw onions, which I know is a turnoff for some people. It actually worked really well here.

But the pesto tomato was definitely the best. The roasted tomatoes, the slightly charred melted mozzarella, the pesto and the spongy bread all made for an extremely satisfying bite. I thought I was done, but then we had dessert.

Everything on their dessert menu is homemade, which is pretty impressive for a chain. While it was difficult to choose, we went with the chocolate mousse and the pear tart with chocolate chips.

The mousse was ok, but it was probably less sweet because I mistakenly took a taste of it after I tasted the pear tart. But…the pear tart was AMAZING! I know that I’m in the land of amazing pastries, so finding a decent pear tart isn’t difficult. But finding one this good is slightly more challenging. The tart was filled with soft chunks of cooked pear and cream, topped with dark chocolate morsels that melted in your mouth along with the softened pear. The crust was nice and firm, but not hard. Put all these together and it made for a truly enjoyable sweet bite.

While it’s certainly easy enough to make these types of things at home (with the exceptions of the desserts; I’m not much of a baker), the prices for each item was pretty affordable, making it an easy place to go to if you’re out on the town and looking for something inexpensive to eat that’s not junk food.

As mentioned, L’Epicerie is a small chain, with locations in Nantes, Lyon, and Rennes.