Les Flots: A meal worth every cent 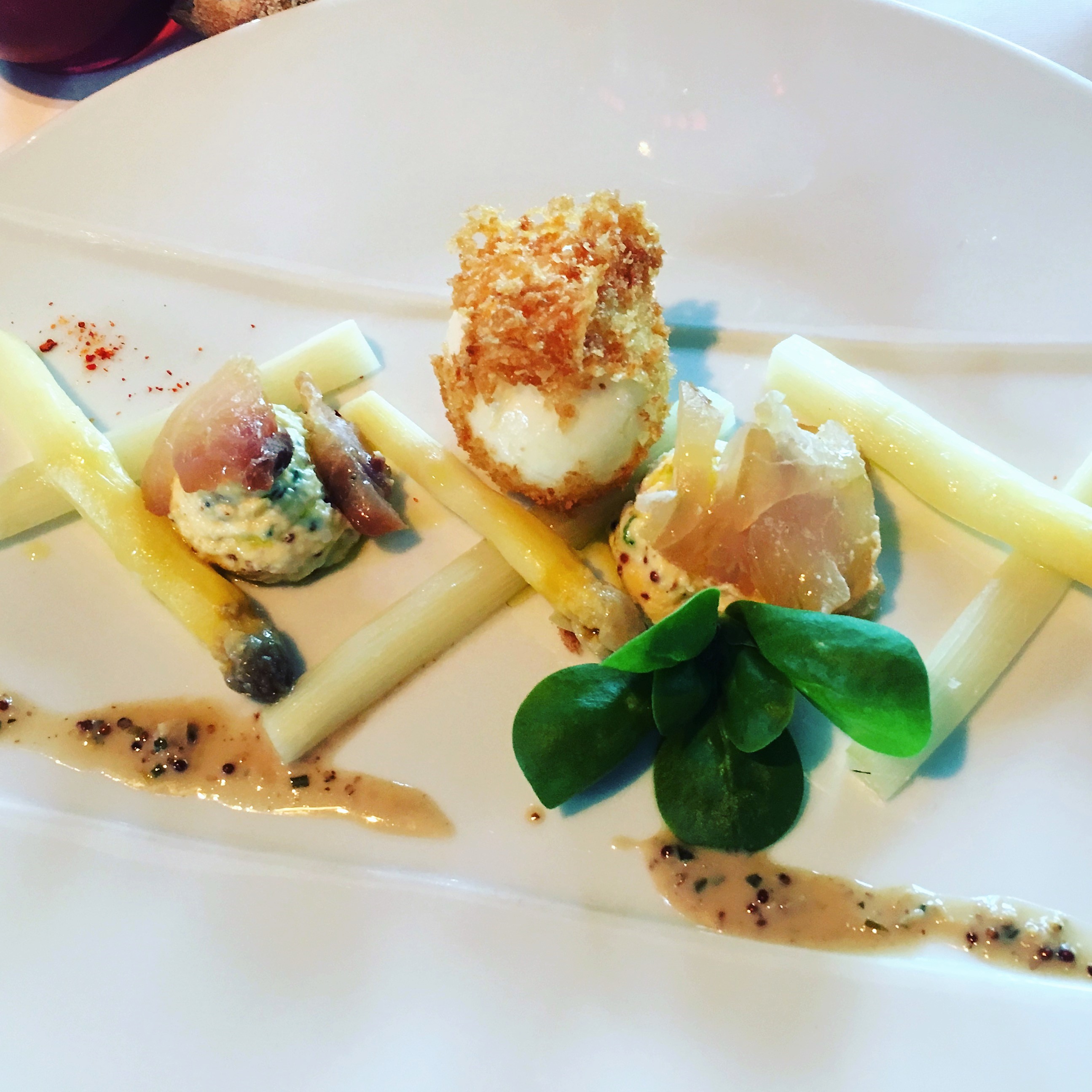 My wife and I recently celebrated our 14th anniversary (hard to believe it’s been that long), and we decided to get away for a weekend to La Rochelle. And, like any good couple, we decided to treat ourselves to a nicer restaurant than we might normally visit. La Rochelle is a prime international destination for people with boat, and because it attracts a more upscale visitor, the restaurant scene there is also quite good. We don’t usually splurge too much on restaurants (especially since we have two daughters who usually go with us), but this was a special occasion. After we looked at a few restaurants online and on Trip Advisor, but also got some recommendations from friends, we settled on Les Flots.

Situated in the heart of La Rochelle on the side of one of the port’s famous towers, Les Flots (pronounced LAY Flow) boasts a mix of contemporary and traditional food, but also decor. The menu is mostly seafood oriented, as so much is in a port city like La Rochelle, but offers a good mix of options for meat eaters as well. Chef Gregory Coutançeau loves to mix and match flavors and textures in innovative ways, which means diners are always in for a flavorful surprise or two.

Although we couldn’t sit outside on their terrace (I had forgotten to request that when booking–lesson learned), we were seated inside near the door, which was open, allowing us to still enjoy the scenery outside and a live free concert that was being given.

Our meal started off with three light and refreshing amuse bouche. The first was a spoonful of shaved cucumber salad that acted as a perfect palate cleanser, cold and refreshing in the hot evening. It was accompanied by a cute little two-bite sandwich made with pesto and a roasted pepper spread that woke up our tastebuds. Thirdly, we received a nice mound of rare marinated beef with red onions that was tender and melted in our mouths. All three bites were nice and light, both in terms of richness and flavor, leaving plenty of room for our first course.

Next, came our appetizer, which to be honest, was possibly the star of the meal.

This white asparagus dish was phenomenal. It was everything you ever want an appetizer to be: fresh, bursting with flavors and textures, delicate but also satisfying. The asparagus were expertly prepared, soft and full of fresh spring flavor. The dish also offered two small chunks of smoked pollock atop a mound of a mustardy mayonnaise. The sauce you see along the bottom was also mustard, but it was very light in texture so that you tasted the purity of its flavor. But the most intriguing piece was the egg, which had been gently cooked and the lightly fried on the outside. The crust was salty and added texture to the dish. And when you broke into it, the yolk oozed onto the plate, amping up the richness of each of the other flavors. The great thing about this dish was that you could mix and match components, each time giving you a new taste perspective. It was so good that we felt challenged not to crudely shovel the whole thing in our mouths at once.

Next came our main courses. My wife ordered the lamb chop and I ordered the tuna grilled on a plank.

The lamb dish came with an elegant single rib chop, and was served with a potato “cromesqui,” a sort of fried potato croquette and lamb shoulder confit with dried fruits. The lamb was tender and flavorful and perfectly seasoned; while the cromesqui was nice and crispy on the outside and soft, warm, and rich on the inside. The lamb shoulder confit was unusual. I thought it was a risotto at first, because it had a creamy texture, but then when we dissected it we saw it had meat in it. And meaty it was, but lacked the usual gaminess that you usually get with lamb. Instead, it almost tasted like a stew. This dish was extremely flavorful and filling, but probably would’ve been better to eat when it’s cold and you want food that will stick to your bones, as they say.

The tuna dish was far lighter, more in line with the warm spring weather we’ve been having here in Western France. The plate was visually stunning between the ruby red of the tuna and the raspberry gastric and the bright green of the daikon “ravioli” it was served with (more on those raviolis in a minute). The tuna was grilled perfectly and was incredibly tender, but I found it to be a little underseasoned in parts. I find, in general, that the French don’t season their meats as much as Americans do. That can be a good thing, as it helps the flavor shine through (American chefs often overseason food), but I do prefer my main dishes to be a little saltier, especially for meatier ingredients like tuna. The raspberry gastric was fruity and acidic, giving it an extremely freshness that paired well with the thick, buttery tuna.

But the real star of this dish was the daikon ravioli. Ravioli was an interesting choice to call it, because I usually associate that with a stuffed pasta. Here, however, the chef created a delicious purée out of a variety vegetables (presumably daikons, but also peas and other items), spread it between two paper-thin slices of daikon, and garnished it with spring peas, fava beans, and radishes. Biting into this concoction was pure heaven. The flavors were subtle, the texture was smooth but not pasty (as some purées can be), the peas and fava beans were toothsome and bursted in your mouth like little fireworks of spring. Combining these flavors with the tuna amped up the fish’s butteriness.

We could have gone right to desert at that point, but I decided to see what was being offered on the cheese cart. I don’t normally order cheeses when I go out to restaurants in France, mostly because it can get very expensive. Here, though, it was a treat, and I knew they’d have some unusual offerings of higher quality. I couldn’t resist. They wheeled over a huge wooden card that unfolds to reveal a wide selection of cheeses, from blues to creamy goat cheeses to aged hard cheeses. I ended up choosing a very light goat cheese with fig (the whitest one on the plate below), an old cantal, and a creamy blue (whose name I forgot to note down–sorry!).

Finally, dessert. As you know, the French take their desserts very seriously. And Les Flots is no exception. My wife took the “Fine tart” and I opted for the “Manjari chocolate mousse.” OMG, these desserts were amazing.

The tart was served with some of the freshest strawberries I’ve ever tasted, which is no surprise since it’s strawberry season here, and were a nice foil to the cream. I’m not usually a fan of meringue, but these were light and airy (as they should be) and offered a sweet zing. The crust was more of a loose granola bar almost, though it wasn’t made of granola. And the strawberry basil sorbet…wow! Refreshing, tasteful, sweet and tart, I could’ve eat a huge bowl of the sorbet. The lightness of this dessert was a perfect end to my wife’s heavier, richer meal.

My dessert, on the other hand, was the perfect foil for my lighter, more delicate meal. The chocolate mousse surrounded a caramel ganache. Every bite was revelatory, bursting with rich sweetness. The mint sorbet was also delightful–light and flavorful, it reminded me of chewing real mint picked fresh from a garden. Combined, the two flavors and textures only served to make each that much more powerful and pronounced. My one complaint about my dessert was that the cookie-like bottom that the chocolate mousse was served on was very, very hard, and was therefore difficult to cut with a spoon or a fork. Nonetheless, it was delicious, and I devoured it entirely.

They also brought out a plate of small, bite-sized desserts: a strawberry tart (different from the one my wife ate) and a chocolate cream tart. At first I didn’t think I would’ve had room for them, but we somehow managed to make space.

The meal was exquisite, the atmosphere comfortable and warm, and the service was outstanding. Our meals were ordered off their “Menu Marche” a fixed price menu that included the appetizer, main course and dessert for 47€. Add in a single glass of wine (my wife doesn’t drink) and the cost of the cheese plate (14€), and our meal came to only 115€, an exceptional value for a restaurant of this caliber.