This roasted ratatouille will knock your socks off!

It’s summertime, which in France (and elsewhere) means that the awesome summer veggies are arriving just in time to make a delicious ratatouille! I’m talking scrumptious eggplant, zesty zucchini, and pungent peppers. They are bountiful, and it’s no wonder that ratatouille is considered one of the hallmarks of French cooking. It’s so prevalent here that people eat it year round, but to be honest, it’s this time of year when the veggies are at their best. As a result, the ratatouille is also at its most flavorful.

In case you’re not familiar with the dish, ratatouille is a stewed combo of eggplant, zucchini, tomatoes, and sweet peppers (typically red, but not always). Traditionally, you’re supposed to cook all the ingredients separately. As you may know, I’m not one for tradition, and I usually throw everything into a pot in strategic order and let it simmer for a long time.

Lately, however, I’ve been really bored with that method. A couple of reasons:

So, I’ve recently thrown caution to the wind and have done a roasted version of the recipe instead, tradition be damned! And I’ve found that this version is not only easy and time-saving, but the flavors it produces can far outshine those of a half-assed stew.

The basic gist of the recipe is this:

I added some sausage to tonight’s meal, but it’s easy enough to do yours entirely vegetarian. Also, I’ve used whatever fresh herbs I’ve had on hand, but this dish works great with basil, lemon verbena, rosemary, and thyme (tonight I actually used a little lemon verbena, sage and dill). 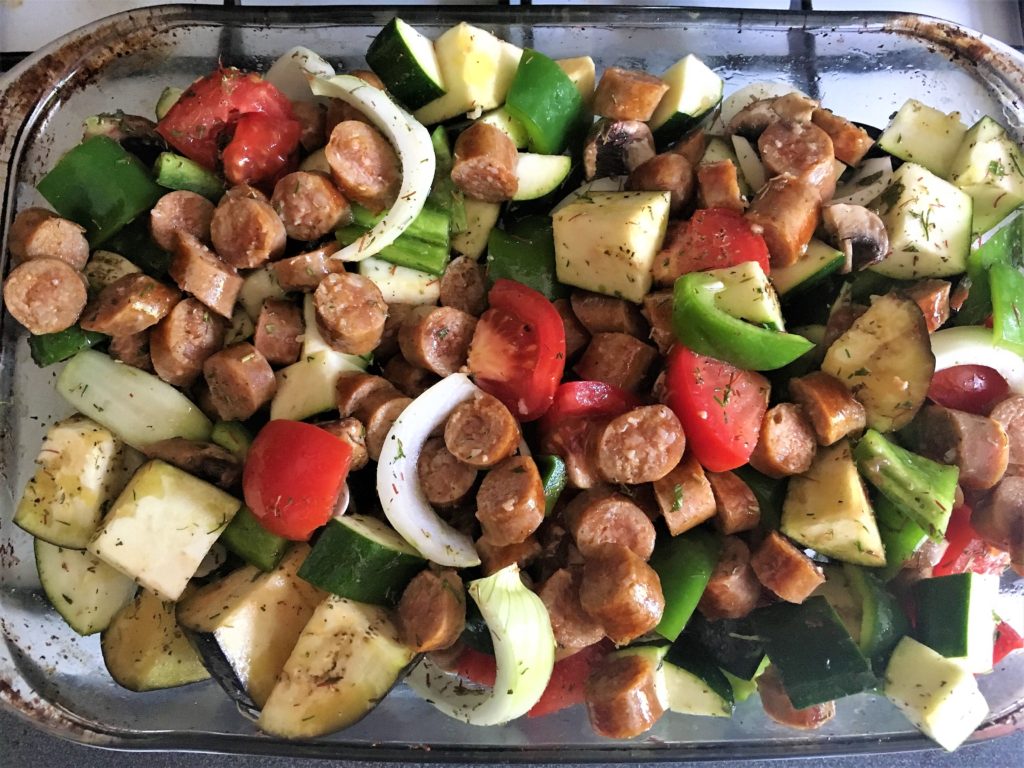 P.S.: You’ll want to get some good crusty French bread to soak up all the delicious liquids in the bottom of the roasting pan.