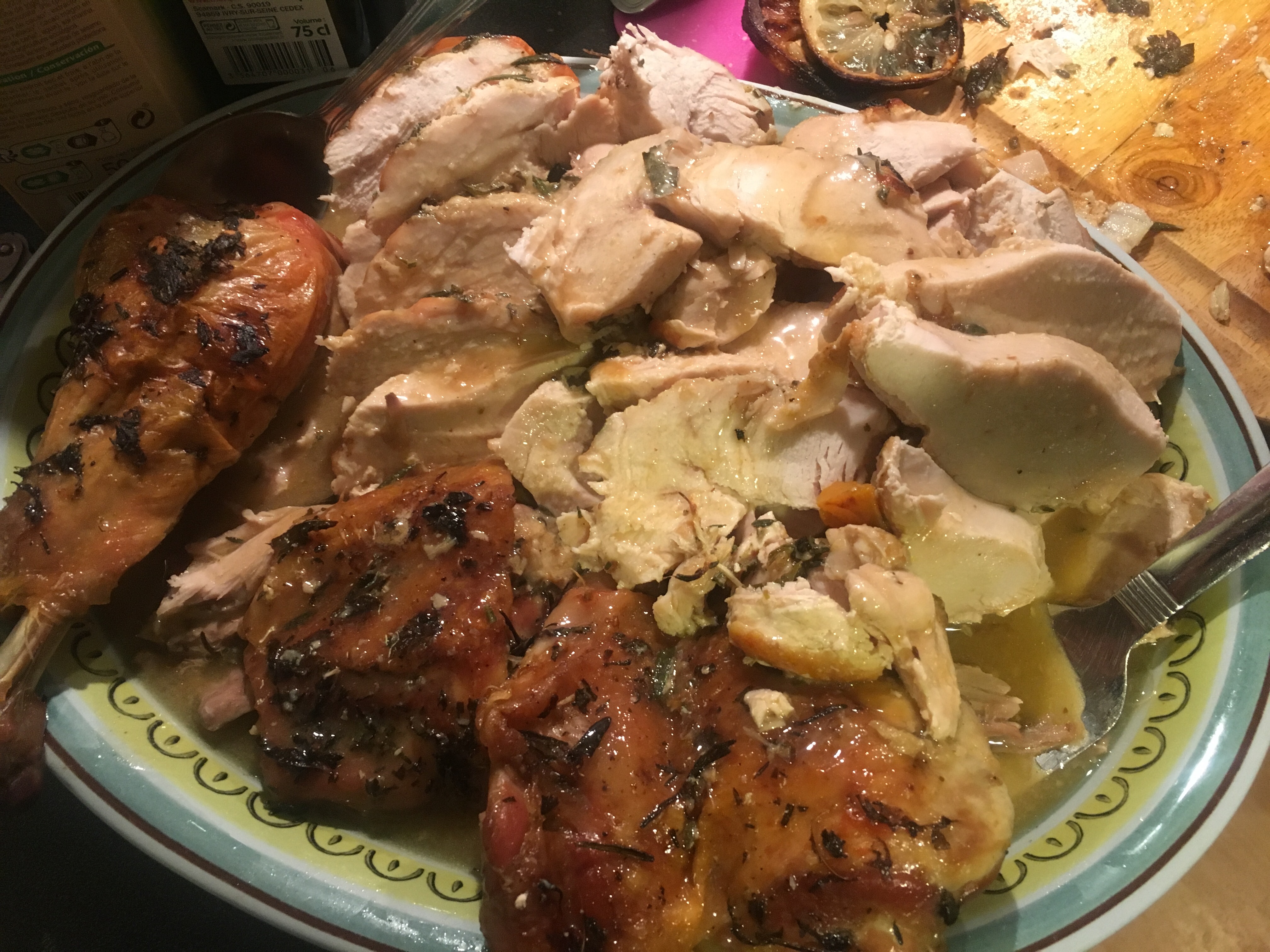 Being an American in France hasn’t stopped me from celebrating Thanksgiving, in fact, it’s done just the opposite. Instead of having to trek out to see family, as was often our custom in the States, we hosted our “French family,” essentially the key people who we have grown closest to over the past year and whom we consider our family.

Thanksgiving in France, though, is necessarily a little different from Thanksgiving stateside. It all comes down to the turkey, of course. Whole turkeys are not commonly sold in supermarkets or at poultry vendors at farmers markets. They are more common for Christmas Eve dinners, and typically have to be ordered 1 month in advance. We were able to get one last year, but this year, ordering one so far in advance slipped my mind and by the time I realized it, it was too late.

But it really wouldn’t have mattered anyway: My French oven is really too small to cook a whole bird. I had a special racked baking tin, specifically designed for cooking large fowl (turkey, duck, goose).

So, this year, I opted to buy these “rotis de dinde,” or “turkey roasts.” They’re basically two boneless skinless turkey breasts wrapped in strips of fat (likely pork) and trussed up. To be honest, I was a little apprehensive about cooking these, as I had never done one before. But, as you can see the pic below, they turned out very well. They were moist and tender, and extremely flavorful. The recipe is below, but first, check out all the other images of our feast.

First, we started off with appetizers: A whitebean hummus and endives stuffed with herbed cheese and topped with crispy bacon (sorry for the plastic wrap in the above pics; we were protecting them from the cats).

For sides, I tried my hand for only the second time in my life at stuffing. It wasn’t bad, but it wasn’t great either. This is one dish that my mother always does so well, and in the past I’ve left it to her. Unfortunately, she wasn’t with us for the holiday this year. I followed a basic stuffing recipe, using two types of bread: a darker “boucheron,” a brown bread I’ve come to absolutely love, and regular “boule.”

Other sides included potato latkes and sauteed kale with potiron, which is a squash similar in taste and texture to  butternut. I also made a cocktail for the evening, which I dubbed, “Napoleon in Bourbon Country” (Napoleon au pays de bourbon in French). It was basically 2 parts bourbon, one part Mandarine Napoleon, a teaspoon of honey, shaken over ice and garnished with a sprig of fresh thyme.

But the best part was dessert, brought by one of our friends. They were kind enough to make a very traditional apple pie, which was superb in every way. I haven’t had a pie like that in ages, and it really recalled memories of the delicious pies my grandmother would make when I was young. We also had a deep, rich chocolate cake that was heavenly, to say the least.

At any rate, here’s the recipe for the turkey roasts. They make a great Sunday night dinner, as well. Eat up!

NOTE: If you can get a turkey roast already prepared by a butcher, skip ahead to step 4. And while our turkey roasts were wrapped in fat, which we couldn’t really eat, bacon makes an awesome substitute.

1 thought on “Thanksgiving in France”