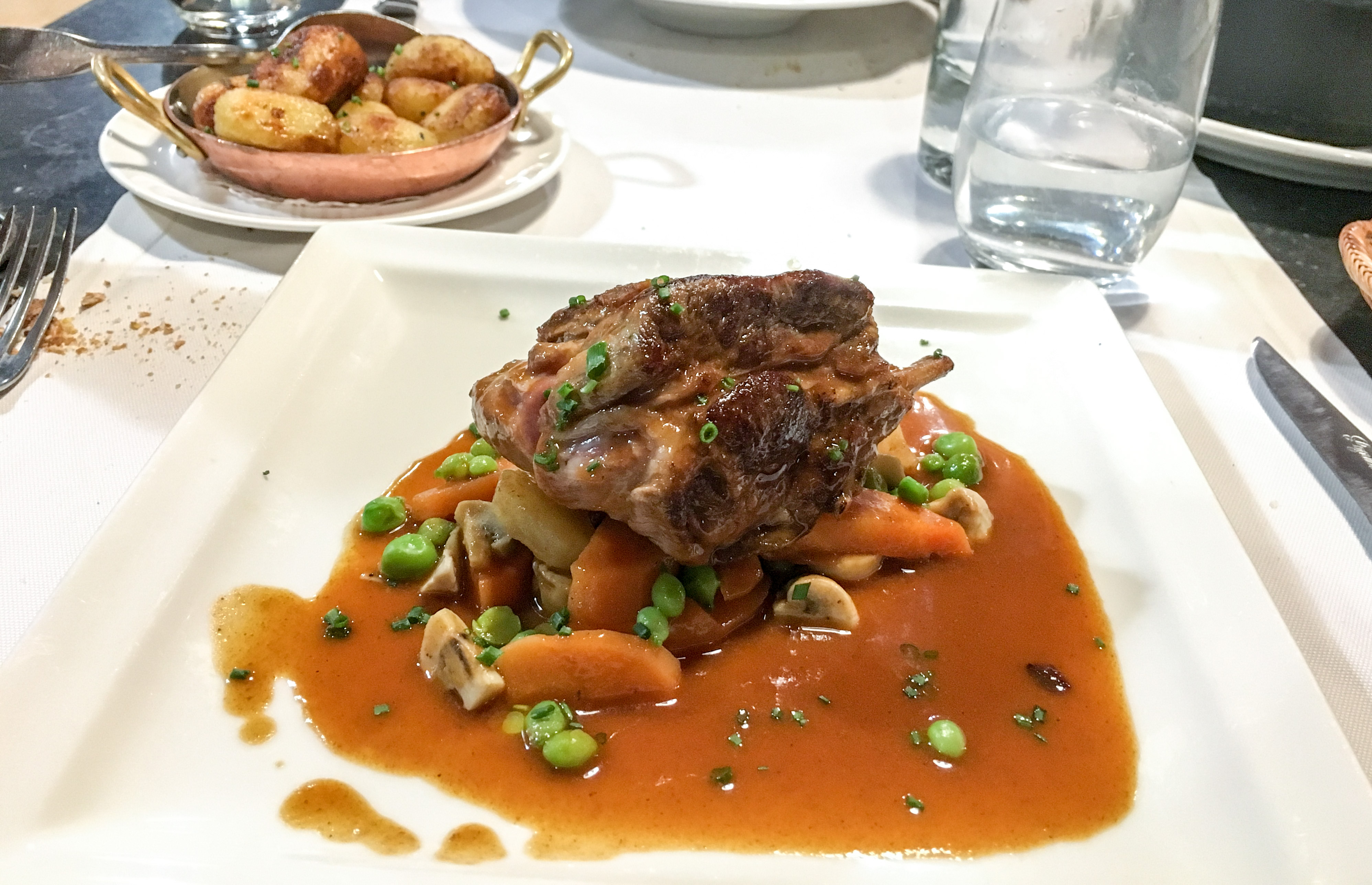 About a week ago, my wife and I were in desperate need for a date. It’s been a long, cold, rainy winter, and we’ve had a lot going on between illnesses, back issues (for both of us), work, travel for our daughter’s karate and to visit friends, and just general busyness. Around the same time we decided to go out, local eating guide Les Tables de Nantes came out (English version here). I had been on the hunt for something new and different, and outside the areas we usually go looking for a good restaurant experience.

I settled on Maison Baron-Lefèvre.

To be honest, I’ve hesitated writing this review for a week now, as it wasn’t our best restaurant experience. But I had an interesting dish that I thought was worth writing about, as well as it gave me an opportunity to gripe about some things related to eating out in France.

Located in what seems to be a converted industrial building, the ambiance is A+. They’ve done a great job of renovating the space, and when you walk in, you’re met with warmly lit cases of homemade jars of patés, jellies, and other items, a variety of big leafy plants, and some reworked old-timey looking metal work. It feels great–as you make your way to the host desk, you feel like you’ve uncovered some sort of secret dining space.

Unfortunately, that’s where the ambiance fell apart for me. The table where we were seated was in the main dining area (they also have a backroom with a handful of tables), and was lit much more harshly than the entrance. This has become a sort of fixture in many restaurants these days, with the move to LED lightbulbs. Being showered in blinding light was a bit of a mood killer. Adding to that, we were seated at a table that had a huge mirror behind one of the seats, and I could see a good portion of the restaurant behind me, but also I could see myself eat. They say that eating isn’t a spectator sport, and watching yourself eat is an even more uncomfortable experience.

We started our meal with a simple platter of smoked salmon, soft herbed cheese and shallots. The salmon was top-notch, though I don’t know if they made it themselves or bought from a vendor. My expectations here weren’t too high, given that smoked salmon is smoked salmon, and doesn’t require a skilled chef to prepare. 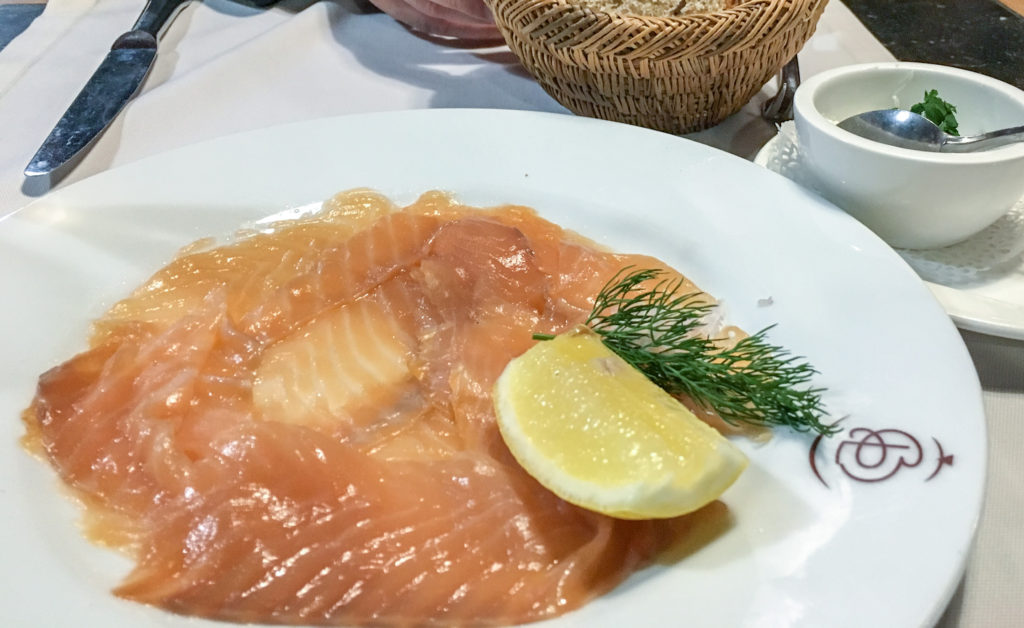 For our main courses, I wanted the sea scallops, but unfortunately they had just run out. Which was odd because the restaurant wasn’t full and we had been seated at a relatively normal time. On top of that, a little while later we heard a woman at another table send hers back because she wasn’t hungry any more. Not that this was the restaurant’s fault entirely, but it was definitely frustrating! Wanting to keep with the seafood theme, I opted for the unusual choice of lamprey eel prepared in a bordelaise sauce. My wife went with the lamb chops (pictured above). 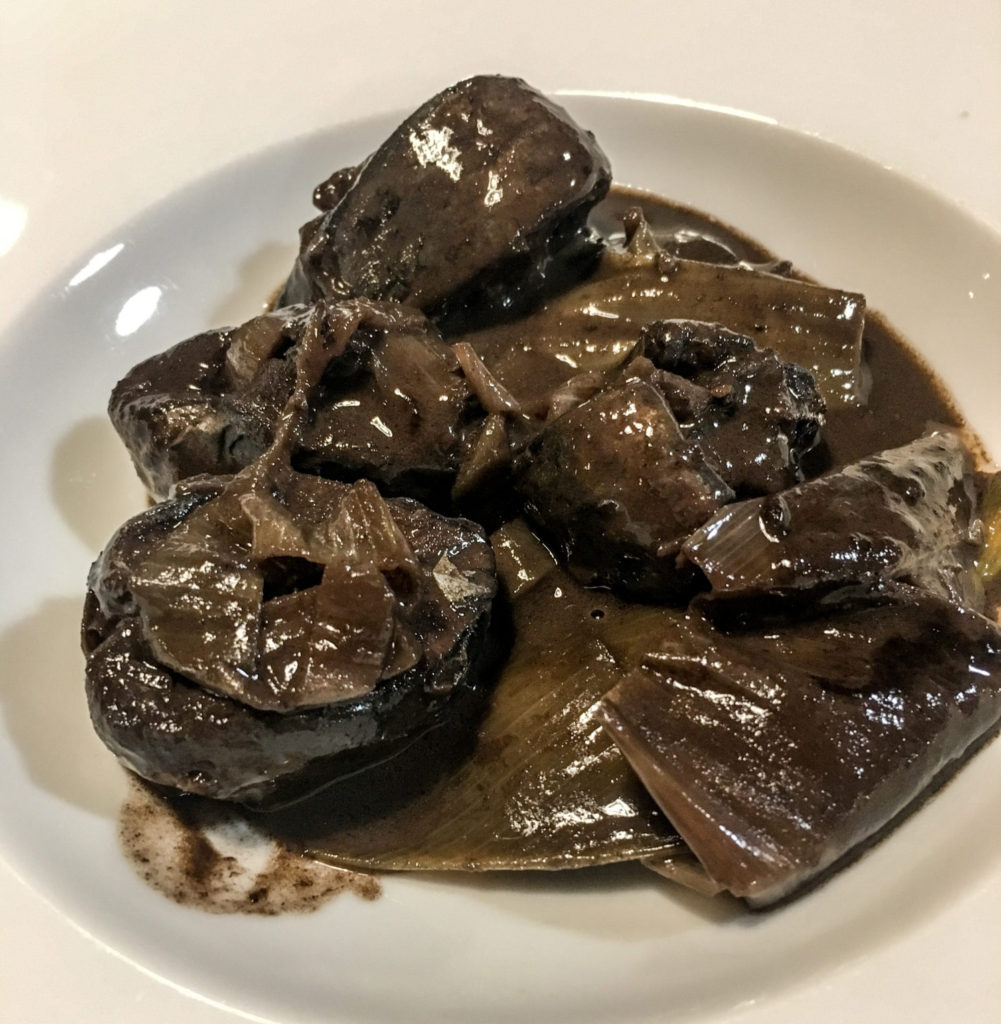 Eel is a specialty of the region, and I’ve had it a few times since we’ve moved here. The cooking was perfect, it was soft and supple, and fell apart quite easily. However, the bordelaise sauce wasn’t the best match for the lightness of the eel (or it just wasn’t done well, difficult to say). Bordelaise, if you’re not familiar with it, is a thick and rich wine sauce. It’s usually a deep brown from the wine and bone marrow that’s used, but this came out inky black, similar to squid ink pasta in color. Flavor-wise, it was a bit on the salty side. My dish was served with a side of steamed potatoes, which I also found odd, given that my wife’s dish came with roasted potatoes that were much more flavorful (it also came with french fries, which we found odd). The steamed potatoes were bland, but they did a good job of balancing out the very salty sauce. My main wish was that my meal had come with more vegetables, but it only came with one leek that, while delicious, didn’t make me feel like I was having a balanced meal.

My wife’s lamb chops were overall good, but a little undercooked for my tastes, though perfectly cooked for hers. Hers came with a variety of roast vegetables, as well as the aforementioned potatoes and french fries (I ended up eating the french fries). The vegetables were delicious, particularly the baby turnips, which are usually too bitter for me. But the meat was a little bland. This is something I’ve found time and time again in France: Many restaurants that serve grilled meats don’t properly season them. We’ve even tried a high-end steakhouse before, and the meat was, well, boring. Same with the lamb chops here.

Dessert was probably the best executed. We ordered a vacherin vanille, a sort of ice cream cake, with a raspberry sauce and demoiselle de caramel, a sort of pastry similar to a Paris Brest and a second pastry in the middle with caramel core, all covered in creme chantilly and caramel sauce. Both were extremely tasty. The vacherin was well-balanced between the sweet vanilla ice cream and the tart raspberry sauce. The demoiselle was also very sweet, though the outer pastry was a little chewy and difficult to cut through with just a spoon or fork (a hallmark of high-quality French deserts). Another pet peeve I had was the long stem they put on the top. I thought at first it was a piece of chocolate or other patisserie made to look like a stem. But no, it was an actual stem. I’m all for decorative flourishes in food, but if you put it on the plate, it should be edible.

And this brings me to the biggest gripe about French restaurants: It’s often very difficult to tell the good ones from the not so good ones. Too often, a restaurant that looks great and has a great menu fails to meet expectations, while many other times, we’ve stumbled upon a gem of a little bistro almost accidentally and not thanks to anything specific in its decor or its menu. Sure, this is true oftentimes in the States. I remember a friend taking me to an out-of-the-way Chinese restaurant that was ugly as sin but had the most knock-out food you could imagine. I just feel like in the States, restaurants that pay close attention to decor, like the way Maison Baron-Lefèvre had, usually produce a higher quality product as well.

Who knows. Maybe it was an off night for them.